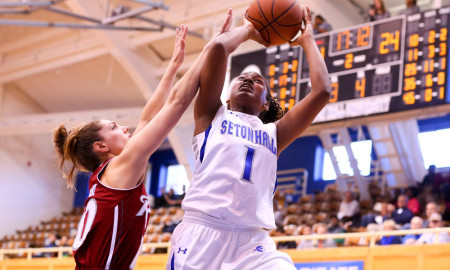 Despite missing over half of her junior season, Nebraska senior guard Rachel Theriot is making an impact during her senior year to make her case for the 2016 WNBA draft.

The 6-foot guard for Nebraska Huskers is averaging 11.8 points with 6.7 assists this season. Currently, she is one of two Big Ten players to have over 500 career assists.

In her career, Theriot has had 13 20-point games and 2 30-point games. She ranks 19th on the Nebraska all-time points list with 1,160 career points and fifth on the career assists list with 521.

So far, she’s started 16 of the 18 games she’s played in. She’s also tallied 19 steals this season and 6 blocks. When it comes down to putting it up from downtown, she makes 57.9 percent of her three-pointers.

In her first three seasons with the Huskers, she’s helped to lead her team to three consecutive NCAA Tournament trips.

Theriot has landed herself a spot on the Naismith trophy watch list for the past two seasons. Additionally, she’s on the finalist list for the Senior CLASS Award.

Before coming to Nebraska, Theriot was a three-time All-Ohio performer and earned an All-Ohio Division 1 first-team selection during her senior year playing for Midpark High School in Middleburg Heights, Ohio. As a senior, she averaged 16.6 points per game, 11 assists, and 6 rebounds per game.

Prior to her senior season, Theriot started her junior season by playing and starting every game for the Huskers. However, her junior season was cut short by injury. She injured her ankle at a practice in early February. She then underwent surgery, which resulted in her missing the remainder of the Big Ten season.

During her sophomore season, Theriot set the single-season Nebraska record with 234 assists.

Theriot’s role on the team helps to lead her team in making plays and assisting other teammates to post big numbers. Her ability to set up the right play and read the court make her a valued player.

Recently, the team traveled to Michigan. They extended their win streak to five games straight, but Theriot sat out due to injury. The last game she played in was Jan. 20 where the Huskers squeezed a 62-61 win out of Purdue. She posted eight points alongside a game-high 12 assists in the team’s win.

Theriot and the rest of the lady Huskers are back in action Jan. 27 when they host Wisconsin at the Pinnacle Bank Arena at 7 PM.