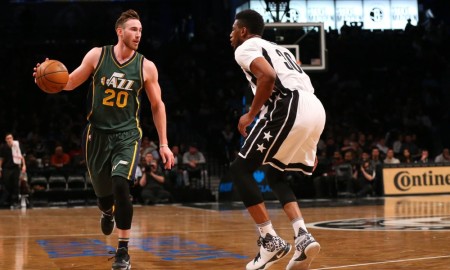 The venerable Zach Lowe spent his week doing a deep dive on the long-term rebuilding plan that the Utah Jazz have slowly been assembling for years. I’m more optimistic than most about the amount of long-term success that Utah is creating for itself, so I found some early passages in Lowe’s piece a little harsh in appraising the team’s long-term future. However, Lowe ultimately came to the same conclusion that I’ve felt for a while now: the best shot that the Jazz have at a future championship is to continue growing with this same group of talented players.

Here are three thoughts that leapt out to me while reading Lowe’s very thorough piece:

I’m glad that Lowe sees that Utah rookie Lyles is full of potential — I see it, too. Lyles is such an intriguing player because, among other reasons, we’ve seen very few young big men who approach the game with so much basketball intelligence. The two players whom Lowe suggests that Lyles could one day play like are Draymond Green and Boris Diaw. Green and Diaw are a pair who are very different in their personal attitude and style, but they have the similarity of creating beautiful, flowing offense for elite teams.

The fact that those comparisons can be made to Lyles, at this point in his career, with a straight face, already means that he fell too far in the draft, at 12th overall. Lyles celebrated his 20th birthday in the middle of this season. Green averaged 2.9 points per game in a limited bench role in his age-22 rookie season. Diaw couldn’t stick in the starting lineup for a 13-win Atlanta Hawks team when he was 22. It might not feel like it, but Lyles is way ahead of schedule.

The main critique that the Jazz have received this season is a thin second unit. More derisively, players like Raul Neto, Joe Ingles or Chris Johnson are burned for not being “real NBA players,” the thought being that general manager Lindsey should’ve been more active pursuing veteran free agents.

On the other hand, Lowe paints a picture where the Jazz would have to — uncharacteristically — rocket way over the salary cap in order to retain all of their present talent.

Given these two opposing forces, I think Lindsey and his team have done a brilliant job of filling out the second half of the team’s roster. By seeking out inexpensive players who play with intelligence and passion, Utah is able to find diamonds in the rough — like Jeff Withey — while there are almost zero wasted future dollars on their cap sheet. Acquiring the type of veteran free agents that fans would most like to see in 2015-16 would require multi-year commitments, and clutter up valuable cap space for future seasons.

It’s a personal pet peeve of mine to hear discussion of, “You can’t win a championship without an elite superstar.” For one, we’re often clueless about who those superstars will be in the future — did anybody see true greatness for Stephen Curry even three or four seasons into his career? And also: it’s not always true. The 2014 San Antonio Spurs won after Tim Duncan had exited that very uppermost echelon, and before Kawhi Leonard had entered it. I loved Lowe’s comparison of a hypothetically successful Jazz future to the 2004 Detroit Pistons, who won that year’s championship with five equally important members of their starting lineup:

Today’s Jazz are obviously a long ways off from being a team with that much identity, experience and style. I think it’d be exciting for the players and their fans, though, to move into the future with aspirations to be the “next” 2004 Detroit Pistons.