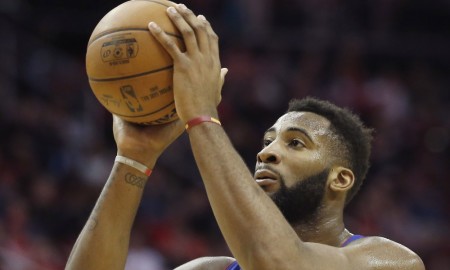 Nardone: People Are Bad at Stuff Like Andre Drummond is at Shooting Free Throws
Pistons Start Believing After Routing Warriors

AUBURN HILLS, MI — Early Monday afternoon, Stan Van Gundy was hoping his Detroit Pistons could use Saturday’s rout of the Golden State Warriors as a springboard toward better things.

Not this Pistons team. At least not yet.

At the beginning of the matinee, they still looked like the group that had shut down the best team in basketball. Nine minutes into the first quarter, with nemesis Joakim Noah sidelined by his shoulder injury, Detroit led 26-13.

Not only that, they were doing the same thing they’d done to the Warriors. Golden State actually shot jumpers very well, averaging 1.27 points for every shot outside the paint — the highest by any Pistons opponent this season. They didn’t hit for gaudy averages, but only 14 percent of their shots were two-point jumpers, so when they hit something, it was almost always a three.

The Warriors tried to go inside, shooting 53 times in the paint, but only hitting 18. Detroit blocked 11 shots and Andre Drummond and Aron Baynes altered more.

Chicago, on the other hand, didn’t even try to go inside. Pistons opponents average 42 shots in the paint, but the Bulls only took 27. They were efficient, making 17 of them, but spent most of their time shooting from the outside.

After the first nine minutes, that’s what changed the game. Detroit’s bench came in with a good-sized lead, and immediately coughed it up. Midway through the second quarter, Chicago was ahead, and although the starters came back to keep it close, a big lead had turned into a 56-53 deficit at the half.

“I thought we played defense for about eight minutes,” Van Gundy said. “That was it. Our bench came in and got crushed.”

On the first possession of the second half, the Bulls showed how they planned to keep the lead. Pau Gasol stepped out for a jumper, drawing Andre Drummond away from the basket. While Drummond does many things well, closing out on 15-foot jump shots isn’t one. Gasol drained the shot, and the Bulls had things worked out.

With Drummond chasing Gasol, Chicago was able to get to the basket. They didn’t turn the game into a layup line, but after scoring 12 points in the paint in the first half, they got 22 in the second. They also hit everything they looked at from the outside, averaging 1.43 points per jumper in the half.

“Andre’s got to close out on those shots — we can’t just let Pau shoot them by himself,” Van Gundy said. “But you’ve got to adjust defensively, but we didn’t play hard enough to do that, and they just took us apart.”

When the Pistons can’t get stops, they can’t run, and no one has accused them of being a finely tuned half-court machine. Detroit shot 40 percent at the rim in the last two quarters, and missed 14-of-18 three-pointers. The Bulls were never forced to foul Drummond — his 3-for-10 performance from the line all came within the regular flow of the game.

The only reason that the Pistons didn’t get blown off the floor was that Chicago was barely trying on the glass. Detroit grabbed 88 percent of the Bulls’ missed shots and 42 percent of their own. That led to enough extra shots that they were able to keep the game within a respectable 111-101 final.

Gasol finished with 31 points on 18 shots against a Detroit defense that looked like it was playing its fourth game in five nights. In reality, the Pistons haven’t had a back-to-back since before Christmas, and had Sunday off after beating Golden State Saturday night.

“I don’t know why we played that way,” said Reggie Jackson, who went 8-for-20 from the floor. “It was like we didn’t have any legs, but we can’t be tired after beating Golden State. We didn’t have any life, we weren’t rotating on defense, and we weren’t playing our system. We can’t win like that.”

The Pistons also did dumb things. With the shot clock running out, Drummond charged at Gasol and managed to foul him on a desperate 28-foot jumper. He also picked up a foul for arguing a call that the officials got right, while Kentavious Caldwell-Pope — the only Piston with a chance of guarding Jimmy Butler — got ejected in the third quarter for picking up a second technical. As with Drummond, replays showed that both calls were correct.

That’s what life is like for the Pistons right now — their biggest regular-season win in years followed by a dud.

Things are still going well — various sites have Detroit’s odds of ending their postseason drought at between 68 percent (FiveThirtyEight) and 82 percent (Basketball Reference) — but fans should plan on a long, frustrating trip.