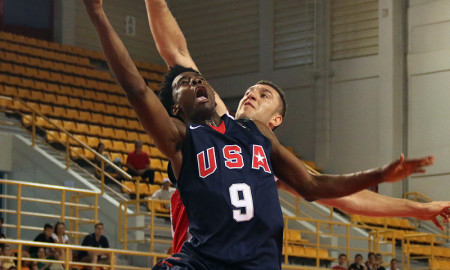 The National Player of the Year in college basketball has been a bit of a revolving door early on this season, as Providence point guard Kris Dunn and Michigan State swingman Denzel Valentine have each earned plenty of praise for their play as favorites in the non-conference slate. While Dunn has fallen off a bit of late and Valentine suffered a minor knee injury which made him to miss four games, Oklahoma sharpshooter Buddy Hield has taken full control as the favorite for the award as we head down the stretch of the season.

Hield is tied for second in the nation in scoring at 25.7 points per game. He’s hit at least four threes in his last six games, including a dominant 8/15 showing from distance for 46 points against then-number one ranked Kansas in a triple-overtime loss. Hield has shown up every game this season, notching, at least, double-figures throughout Oklahoma’s first 18 games. Obviously, he has been impressive this season, but how will his current success translate to the NBA?

As a senior, Hield has taken full advantage every season of adding different dimensions to his game. This year, he has worked most on improving shot selection and efficiency — and it’s showed thanks to a huge improvement at finishing in the paint. He’s shooting 52.1 percent from the field after not topping 44.5 percent in each of his first three seasons. He has also seen a huge jump from three-point range, shooting a ridiculous 51.7 percent from deep, after shooting a mere 35.9 percent as a junior and 38.6 percent as a sophomore. This type of gunning has helped push him into the late-lottery as a prospect.

Hield’s ball handling and court vision have made major strides as a senior, as he’s averaging a career-high 2.5 assists per game at this stage, although that comes with a career-high in turnovers as well (3.1 per game). He also still needs to work on an in-between game as well, as he’s shot just 32.2 percent on mid-range jump shots, per hoop-math.com. These are two areas where scouts hope to see more improvement from Hield as he heads to the next level, but with less defensive attention, it should help his career outlook.

Unlike most sharpshooting guards, defensively, Hield is far from a liability. At 6-4.5 and 215 pounds with a 6-8.5 wingspan, Hield’s size compares favorably to fellow 2-guard Bradley Beal. That’s not to compare the two, but Hield does a nice job playing both ends of the court where he has the athleticism, quickness and defensive aptitude to play solid defense.

Hield has blocked a career-high 10 shots already this season and has matched his career-high with 1.4 steals per game as well. In time, Hield should prove to be at least an adequate defender in the NBA, and when you pair that with his lethal shooting ability — it makes for a pretty promising prospect.

If I were to give an NBA comparison for Hield, it’d have to be a more well-rounded Jodie Meeks. Meeks wasn’t as dominant of a volume shooter as Hield has proved to be during this standout senior season, and Hield is a much better defender.

I believe Hield can be a starter in the NBA down the line, at least, as a three-and-D guy, with the possibility he develops into something more with his elite work ethic and passion for the game. There’s no doubt in my mind, after workouts during pre-draft, that Hield is a surefire lottery pick and possibly a top ten pick in the 2016 draft.